I’m posting summaries, background and other tidbits about some of the stories from my collection It’s Not the End and Other Lies, which is only available through the Exclusive Dark Fantasy and SF Bundle – Curated by Douglas Smith. This bundle offers 11 ebooks of science fiction, fantasy and horror for only $15! But, it’s only available until September 9, 2020.

Minor spoilers follow, but nothing you won’t find out in the first few pages.

“The Machinery of Government”

I like apocalypse stories. But so many of them follow either the very powerful, or the average, everyday person. What about someone in between?

I started thinking about this when watching The Stand mini-series in 1994. Molly Ringwald’s Frannie Goldsmith says she has tickets to see R.E.M., which got me thinking: If  R.E.M. exists in that world, what happened to them? What would people who were wealthy—but not super-rich nor holding significant political power—do in an apocalypse?

It would take over a decade before I wrote “The Machinery of Government”. In this story, Ottawa (Canada’s capital) is suddenly attacked. Paul—a newly appointed junior cabinet minister—finds himself one of the few surviving members of the government and is ordered to evacuate the city. Except his wife Laura is out in the city and he doesn’t know where, just that she’s trying to get to him. As the attack intensifies and the enemy closes in, Paul must decide if he’ll wait for the most important person in his life, or fulfill the obligations of national security suddenly thrust upon him. All the while, technology feeding him information on the attack threatens to overwhelm his will, his physical health, his sanity.

“The Machinery of Government” is both a fast-paced sci-fi thriller and an examination of the dehumanizing effects bureaucracy and technology can force on. In a disaster, we are sometimes asked to set aside what makes us human—compassion, sympathy, grief—to help those around us. At the same time, technology allows us to process tremendous amount of information in a glance, but can also remove the human element from our ability to process the situation.

In the end, how much of our humanity must we surrender to serve humanity? 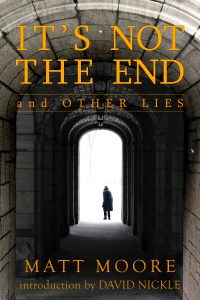 “The Machinery of Government” is one of 21 stories of the bizarre, the terrifying, the all-too-near future you’ll find in It’s Not the End and Other Lies. Get it, along with other titles of horror, dark fantasy, and weird fiction, through the Exclusive Dark Fantasy and SF Bundle. It’s only $15 for 11 ebooks.

Get Exclusive Dark Fantasy and SF Bundle on the StoryBundle site

My short story collection available for a limited time

Where else is Matt

Taking some time off for the time being…